In the last episode you probably read the story of Anna and her husband, who decided at the right time to engage the services of an interior designer and in retrospect considered it the best decision they made regarding the furnishing and renovation of their apartment. Although the services of a good designer are invaluable, it can significantly affect the anticipated project budget. However, in the long run, it’s an investment that pays off. For example, it eliminates solutions that must be redesigned over time.  Remember that a design is like a philosophy with its own unique characteristics aimed at achieving some objectives. Let’s take another look at the function, this time through the lens of the professionals themselves.

Avoid cheap materials, which will definitely not pay off as an investment, because they will have to be replaced soon. Bet on durable materials that will last and look good even after years. In the kitchen, an engineered stone looks great, which you will not regret.  “Our typical client buys another apartment and wants to avoid mistakes made while renovating and furnishing the first one.  This is the primary reason why they refer to us. ”(Photo source: interior design Hana Matějková)

Once you decide to invest in the services of a designer or architect, the negotiation is transparent and you would know details of the budget. Architect Maria Maninová notes that the stumbling block does not have to be the price itself, but  ignorance of the envisaged scope of works.

“Many people have no idea what the role of an architect is and what his input would be, and they cannot  imagine the volume of mental work or work that is not visible involved. I outline the price offer so that all phases and tasks are clearly described, but I can imagine that the perception may not be fully understood by the layperson. ”

The biggest item in pricing is the compensation for work done by the designer. The  professional spends a lot of time on the project itself, from the introductory meeting, through the proposals to the stage of  actual implementation.

Time plays a major role in this aspect.  This is also one of the reasons why most studios charge an advance payment which is deductible from the agreed sum at the preliminary design stage . The designer and owner of the kitchen studio Petr Černý, who produces traditional English kitchens under the Annie Edward brand, took this step after an initial mistake,  when he did the preliminary designs for free, spent a lot of time on them and the prospective customer takes his design somewhere else for cheaper execution . A refundable deposit (advance payment) shows commitment and eliminates customers who are not ‘’serious’’.  “I guarantee the quality of work, which is reflected in the preliminary design, and it is only fair to be rewarded for it. I was initially apprehensive of this step, but since the introduction of the deposit, the number of relevant orders has increased. This allowed us to devote effectively more time
to the needs of our clients. ” 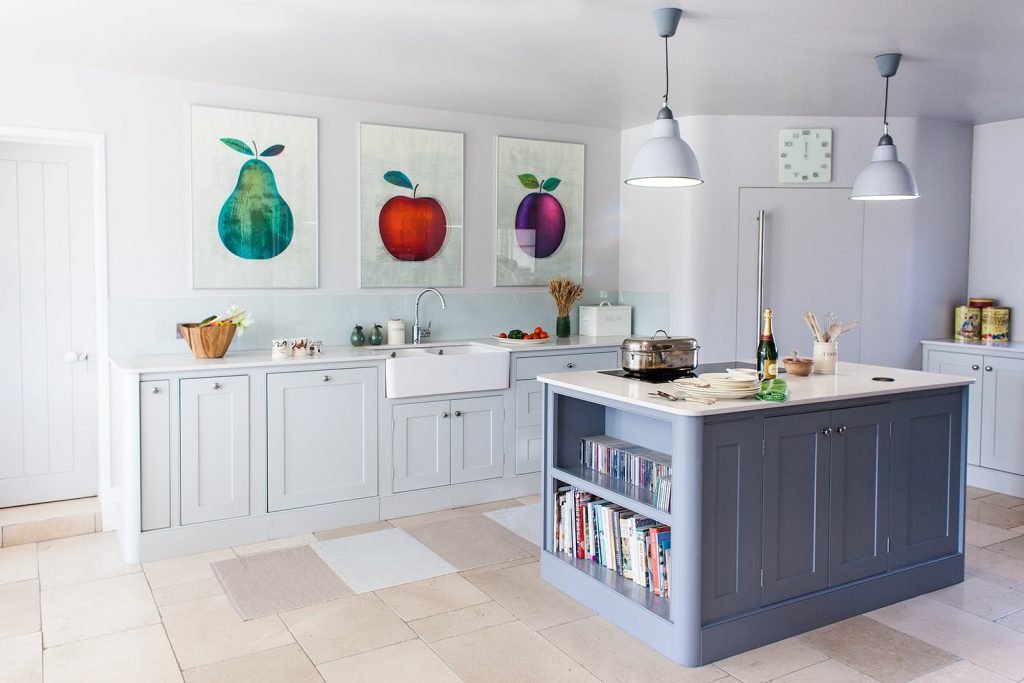 Once the terms have been agreed, the initial deposit for the design will be deducted from the agreed sum in the event that the order is produced and realized by the studio that developed it. The amount of the deposit varies across studios, and is usually a percentage of the agreed sum usually based on the project cost. This can sometimes run into some thousands. (Photo source: kitchen studio Annie Edward)

The hare in a semi-transparent sack

The design often includes several alternatives; there is no need to worry about finding and coordinating the people to carry out the implementation. Architects and designers work with trusted craftsmen have the whole process so-called “taken care of”.

The price offer therefore reflects the volume of services that you order from a professional; however, few people are aware of what other costs the price consists of.

Potential clients can reach out to designer Hana Matějková, when considering acquiring the property or construction stage.  “We have real estate experts in the office who can advise on the purchase of real estate, whether the price is reasonable, whether the investment pays off, etc. It is mainly used by those for whom we arrange apartments for further rent.”

More and more architectural offices offer similar services and use  paid advertising to help them find clients early in the housing project. The sooner an architect or designer invests in a project, the more money he can save on unsuccessful changes or hasty decisions. However, advertising is also one of the other items that an architect or designer must take into account in his price.

Rent and the accompanying services such as equipment, fuel, hardware and software, VAT and profit also play an important role, as they form part of the business, not just reimbursable items. The time-sheet of the designer must also include the time spent on training and further education in his pricing, because even if he does not complete it in one project he is currently working on, it moves him forward so that he can offer better services in the future. Last but not least, it is necessary to save up an egg nest and “unforeseen events”. 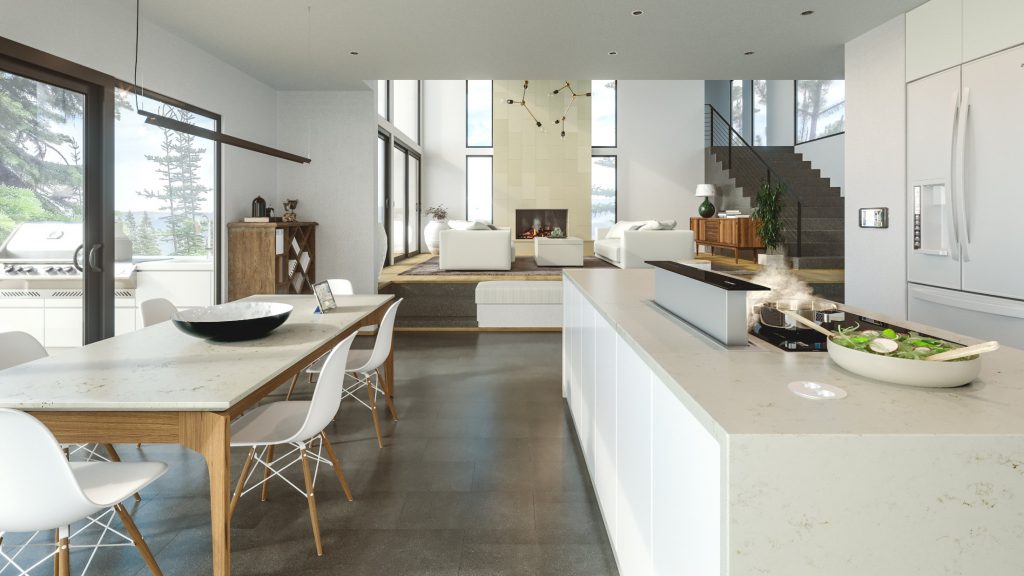 Realistic visualization of the interior design will help you clarify the idea of ​​future living and you can prevent the result from not meeting your expectations. (Photo source: Technistone)

That’s why prices vary so much across regions and there can be significant differences between studies. The price offer from a professional who works on his own will certainly be different than from a studio that employs several other people because of overheads. If you want to implement the project using a company from the Ústí nad Labem region, it will definitely be priced differently from when using a Prague company. And of course the offer you get from a renowned studio with dozens of projects on their prospectus will differ from what you get from  a small association of professionals who have not been on the market together for so long. It must  however be noted that a new company could be made up of experienced professionals while older companies are using the less experienced, therefore, company profile is sometimes useful . However, this does not compulsorily affect the quality of services offered. Often the price of services is influenced mainly by exposure. Architect Tereza Janků adds “with years of experience, self-confidence increases and thus a better awareness of one’s worth“ .

When decorating a kitchen, we often fall back on the proven classic colors: white, gray, black, and wood tones. Few of

‘Our greatest source of inspiration is the unending variety of colours, materials, textures, scents, and all the

Every home is unique. It’s a home that is unique and different, with different needs, different lives and

Colors play a much more important role in our lives than they might seem at first glance. They are not only a wide

It enlivens the interior and never becomes boring. The stone is a unique addition to the interior, but it can also be

Milica Pavlovic and Luka Bogdanovic are Serbian designers who despite their young age, have an admirable number of completed projects to their credit. They work on private apartments as well as public projects and their work mainly

When decorating a kitchen, we often fall back on the proven classic colors: white, gray, black, and wood tones. Few of us have the courage to try some more imaginative combinations. The colors of a kitchen can reflect and highlight the

‘Our greatest source of inspiration is the unending variety of colours, materials, textures, scents, and all the other things that surround us in nature. They stimulate our creativity and guide us toward new and unique designs’. These

Every home is unique. It’s a home that is unique and different, with different needs, different lives and different priorities. A home is a chronicle of all life’s achievements and major changes. Just as human character is

Colors play a much more important role in our lives than they might seem at first glance. They are not only a wide spectrum of different shades, but also reflect our individualism. By choosing them, we communicate to the world what we are

It enlivens the interior and never becomes boring. The stone is a unique addition to the interior, but it can also be its base.  It all depends on making the right choice and positioning it in such a way as to highlight its

7 sins of the interior and how to avoid them

Looking for ways  to  cleverly  avoid the most common sins? The first step is the right choice of interior elements thought through to the last detail. This will protect you from mistakes and failures that people unintentionally make.

Lucie Hovorková and her Scandinavian kingdom

The northern wind is fresh, simple and brings functionality together with purity and timelessness… In recent years, the wind from the north has been blowing harder and stronger. In many of our households, it leaves a mark of fascination

How to make a bedroom for 3 children?

Setting up a bedroom for three children may not be easy, especially when it comes to kids of different ages. Sometimes, however, due to the available options, it is not possible to provide children with separate rooms, but we can provide

Modernism in the classical concept

The exclusive project Dlážděná Palace is located in the historical center of Prague. After reconstruction, the 19th century neo-Renaissance building adopted a new, highly modern façade in the courtyard in addition to its original

The minimalist, elegant kitchen area is the dream of all those who are looking for a functional and modern style, coupled with a simple and timeless design. Icelandic living is still little known to us Europeans. It mixes a cocktail of

‘’ Design is only for the audacious! ’’ This emphatic statement carries the professional signature of residential designer Iva Hájková. Its bold realizations are completely beyond the catalog mainstream. They have a philosophy ,