When you are down with a flu, go to a doctor. If you enter into a contract with unfavorable terms you will turn to a lawyer for advice. You therefore also need an expert advice when you are getting a place to live. Home is where you should feel happy. It should be beautiful, but also practical and well thought out. Why is it important to turn to a professional designer right from the preliminary stages? What are their duties and fees commensurate for services rendered? Read the first part of the micro -series about the services of designers and architects.

It’s never “too early” for a professional

Anna, a newlywed, moved into their newly renovated apartment with her husband. Initially they exchanged their studio apartment near the center of the city for a 2-room apartment with kitchen, toilet and bathroom on about 60 m2   with good access close to a forest park. It appears to be a luxurious palace for them in terms of space and is modestly but tastefully furnished. At first glance, you wouldn’t distinguish it from any other apartment.

Now let’s cut to a seven years later. Anna and her husband are still in the same apartment, but now with their twins Adéla and Matěj and one-year-old Julie. Their dog Cukřík, a cat called Pepper and Boris the parrot are also part of the family. They do not complain about the lack of space, their apartment gradually adapted to their needs and number of children. Anna and her husband took a very clever step before the reconstruction. They hired an interior designer. 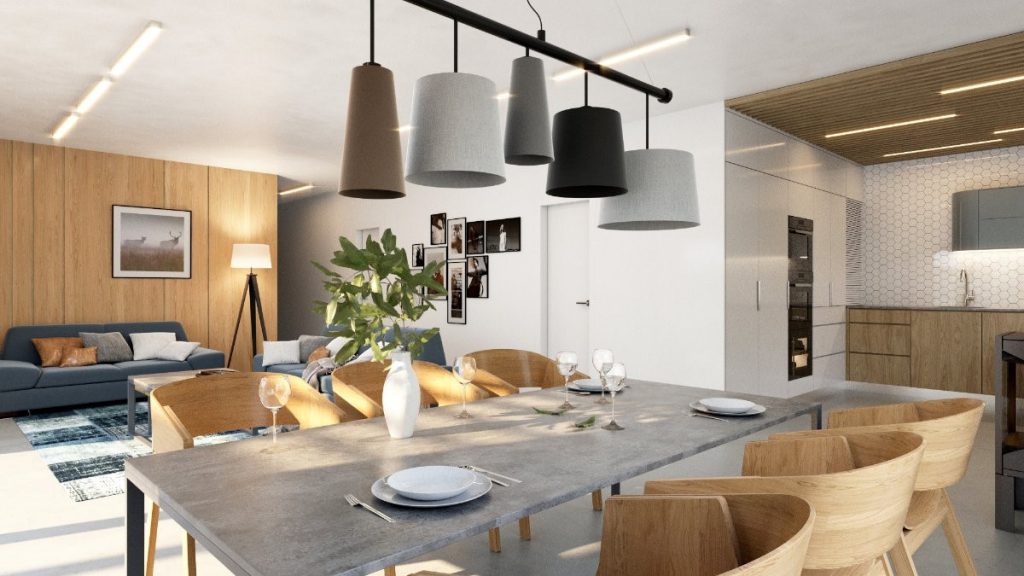 You can hire a designer at any stage of home planning. It will help you prioritize and meet your needs in the long-term.

A functional interior is designed to meet your needs

“The designer was recommended by my husband’s colleague. He praised him all the way, how he had designed a new house for them. We were hesitant to invest in such a service. We did not want an apartment from a catalog or in line with some laid down principles which might at the end make it generic. We weren’t even sure if we could afford such services.  We wanted to arrange the apartment ourselves and we went to the first meeting mostly out of curiosity, „Anna says of her experience. „It was unbelievable how quickly we caught each other’s eye. We hardly dealt with the floor plan, drawings or what we like. He asked about our lifestyle, dreams and aspirations.  After about an hour and a half, he started to tell us his idea, he made a few hand sketches on a piece of paper and I don’t even know how it happened, but it was exactly the moment that convinced us both. The man knew what we needed and thought about the future.”

Designer Hana Matějková also emphasizes the importance of a personal approach. “This is what our studio is based on. Before we start personalizing the proposals, we talk about everything possible for at least two, but even five hours. This is the only way to make a design truly unique to the client and not as a designer’s representation.”

Anna and her husband were young, had lots of dreams and plans, and wanted their place to be like a harbor where they could recharge and be themselves. “We told him that we wanted to have a big family, travel a lot, and have dinners for family and friends. I wanted to have enough space for my hobby – sewing and my husband needs storage for sports stuff, because he enjoys loads of activities. In fact, the more we talked about it, the less idea we had of how to fit it all into the apartment. But our designer wasn’t fazed at all. On the contrary, he cleverly divided the rooms with a tall cabinet up to the ceiling, and in several places he designed really simple custom-made furniture that could be manipulated easily. As the children arrived, all we had to do was rearrange stuff. We have never felt tight here. Everyone can have their own corner here. ”

Floor-height cabinets give you plenty of storage space and can also cleverly divide the room.

A good designer can save a lot of time and money, his design is not superficial, but timeless, original and unique to the client. Designer Jana Pyšková adds, “I think we are well suited for our clients. He doesn’t hesitate, he doesn’t waste money and will thoroughly think of an interior. And what is most valuable about the project – the client will live comfortably there without considering why because it all becomes so natural’’

An investment worth more than gold

Anna chose the furniture and accessories herself. “I appreciate that the designer gave us enough space to style our living in our own way. But honestly, he takes a lot of credit for that as well. He helped us declutter a little at the beginning, we realized that we do not need to constantly fill the space. He was able to convince us that sometimes it is better to choose a little more expensive, but quality pieces. He was right, after seven or so years with the children, our wooden dining table got a little tired, but we’ll give it another seven or so years before we just sand the top and it’ll be like new.

We also took his advice when choosing a kitchen and worktop made of engineered stone. Especially because of the children who like to help with cooking, I appreciate its resilience. You know how  kids are constantly dropping something on it and the darker the condiment the more fun it is to smear it on the countertop.  We chose white to optically enlarge up the space, and it is spotless, well maintained. I am glad that we took the advice and in retrospect we do not regret the decision’’

Designer Zuzana Fašungová adds that you do not have to compromise between design and practicality when choosing materials. “I like to use TechniStone® worktops where you don’t have to worry about stains even on a white pattern. It is durable, very soft to the touch and aesthetically attractive.” 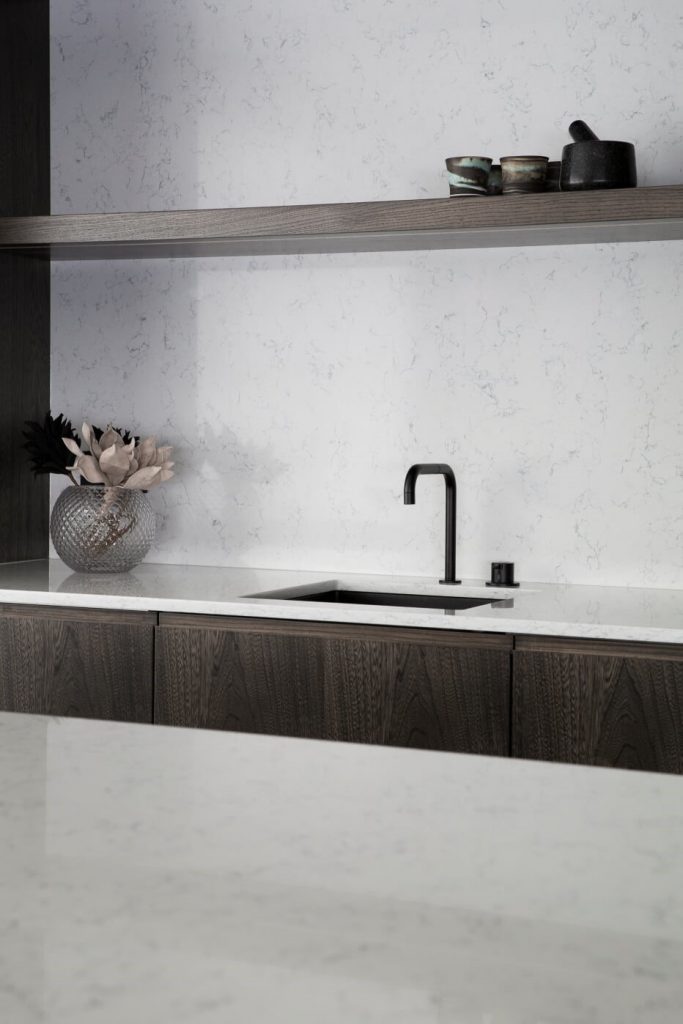 TechniStone® can also be used as a tile over a worktop and visually unify and lighten the entire kitchen counter.

Anna has no regrets in investing in the services of an interior designer. “In retrospect, I must say that he was much more of our partner, I do not regret it for a second and I do not know what we would have done without his services. Maybe we wouldn’t be living here anymore because we might have considered moving to a more expensive and unnecessarily large apartment.”

When decorating a kitchen, we often fall back on the proven classic colors: white, gray, black, and wood tones. Few of

‘Our greatest source of inspiration is the unending variety of colours, materials, textures, scents, and all the

Every home is unique. It’s a home that is unique and different, with different needs, different lives and

Colors play a much more important role in our lives than they might seem at first glance. They are not only a wide

It enlivens the interior and never becomes boring. The stone is a unique addition to the interior, but it can also be

The Colour of the Year, Very Peri, Finds a Place in Interior Design

The new colour Very Peri is causing quite a stir around the world. This electric purple colour at first glance looked

Milica Pavlovic and Luka Bogdanovic are Serbian designers who despite their young age, have an admirable number of completed projects to their credit. They work on private apartments as well as public projects and their work mainly

When decorating a kitchen, we often fall back on the proven classic colors: white, gray, black, and wood tones. Few of us have the courage to try some more imaginative combinations. The colors of a kitchen can reflect and highlight the

‘Our greatest source of inspiration is the unending variety of colours, materials, textures, scents, and all the other things that surround us in nature. They stimulate our creativity and guide us toward new and unique designs’. These

Every home is unique. It’s a home that is unique and different, with different needs, different lives and different priorities. A home is a chronicle of all life’s achievements and major changes. Just as human character is

Colors play a much more important role in our lives than they might seem at first glance. They are not only a wide spectrum of different shades, but also reflect our individualism. By choosing them, we communicate to the world what we are

It enlivens the interior and never becomes boring. The stone is a unique addition to the interior, but it can also be its base.  It all depends on making the right choice and positioning it in such a way as to highlight its

7 sins of the interior and how to avoid them

Looking for ways  to  cleverly  avoid the most common sins? The first step is the right choice of interior elements thought through to the last detail. This will protect you from mistakes and failures that people unintentionally make.

Lucie Hovorková and her Scandinavian kingdom

The northern wind is fresh, simple and brings functionality together with purity and timelessness… In recent years, the wind from the north has been blowing harder and stronger. In many of our households, it leaves a mark of fascination

How to make a bedroom for 3 children?

Setting up a bedroom for three children may not be easy, especially when it comes to kids of different ages. Sometimes, however, due to the available options, it is not possible to provide children with separate rooms, but we can provide

Modernism in the classical concept

The exclusive project Dlážděná Palace is located in the historical center of Prague. After reconstruction, the 19th century neo-Renaissance building adopted a new, highly modern façade in the courtyard in addition to its original

The minimalist, elegant kitchen area is the dream of all those who are looking for a functional and modern style, coupled with a simple and timeless design. Icelandic living is still little known to us Europeans. It mixes a cocktail of

‘’ Design is only for the audacious! ’’ This emphatic statement carries the professional signature of residential designer Iva Hájková. Its bold realizations are completely beyond the catalog mainstream. They have a philosophy ,